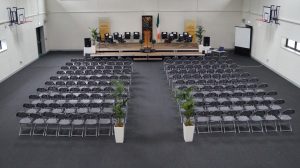 The official opening of the new school building and facilities at St. Brendan’s College in Woodbrook took place on Friday April 15th. A large number of invited guests including staff members, parents representatives, Board of Management, Local TD’s and councillors, past parents and staff, representatives of the Congregation of Irish Christian Brothers, the Edmund Rice Schools Trust as well as other local dignitaries were in attendance. The official opening was performed by Mary Mitchell O’Connor TD and the blessing was performed by Monsignor Dan O’Connor from Archbishops House. Prayers of intercession were read by Callum Brierton (Head Boy), Ryan Cromwell (Student Council Chairperson), Rory Ellard (6th Year Prefect), Daniel Munroe (1st Year Prefect), Peggy Masterson (Board of Management), Anne Flynn (Parents Council) and Michael O’Brien (Teacher). There were addresses from Pat Keating (Chairperson of the Board of Management) and John Taylor (School Principal). Part of the ceremony included the screening of a specially made DVD by the students looking back at the old school and forward to the new school. Once the formalities were completed, presentations were made to Mary Mitchell O’Connor and Monsignor Dan O’Connor and then the guests adjourned to the school assembly area for a reception. The official opening of the new building also marked the rebranding of the new school which will see the school open as a co-educational school in September 2016 under its new name of Woodbrook College.