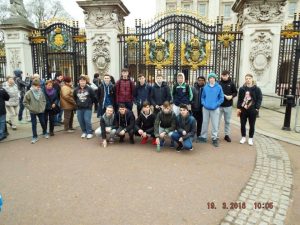 Each academic year sees the Transition Year group take part in a trip to a foreign country. This year the group visited the City of London. It was the highlight of their school experience and will be fondly remembered for its action packed itinerary.

The boys visited all the major sights such as Buckingham Palace, HMS Belfast, The Imperial War Museum, Trafalgar and Leicester Square for many a photo opportunity. Watford Football Academy had invited the boys to train with them and then treated us to a Premiership game against Stoke City which was hugely kind of them.

We rounded off the trip with a visit to Thorpe Theme Park were water-slides, gravity-defying rides and a generally tip-top time was enjoyed by all involved.

The boys wished to pass on all thanks to the London team of Mr. Fitzpatrick, Ms. Dwane and Mrs. Burke.